The Harmonic System is one of variations of the Universal Unit System.

By surprising coincidences, if the dozenal number system is used to express the speed of light in vacuum and the quantum of action as the defining constants such that these constants are strictly multiples of integer powers of twelve of the unit quantities, it is possible to construct a coherent unit system in which not only the constant that was used in the definition but also the Rydberg constant, the Bohr radius, the unified atomic mass unit, and half the value of the Planck length can be approximated to about or within an error of 2 per gross (11/2%) by a multiple of integer powers of twelve of the unit quantities.

For putting these coincidences to use, the dozenal number system is the only choice.

(Please refer to dozenal.com for the overall Universal Unit System. The notation of this article is in principle according to footnote 1 of revised.pdf.)

The Harmonic System is conceptually designed and strictly defined as following:

'Conceptual design' is the system design that prescribes the rough quantity of the units to constitute a unit system conceptually.

The Harmonic System is conceptually designed to express the following quantities as multiples of integer powers of twelve of the corresponding unit quantities.

'Strict definition' is the system definition that corresponds strictly to the theoretical equations that a unit system is based on.

The Harmonic System is strictly defined to express the following quantities as the corresponding unit quantities.

All the units which have special names peculiar to the Harmonic System are listed as following: 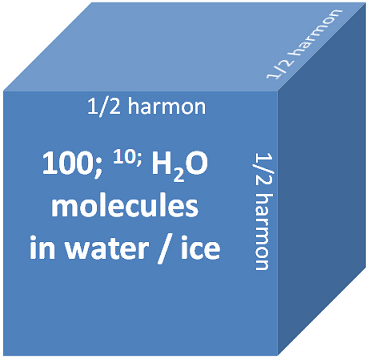 This is almost 1/1000; of the difference of the length of one Julian year and one mean tropical year.(difference 0.14% at the beginning of year 1900.)

This is slightly lighter than 1/100; of the mass of water in one cubic harmon capacity.(difference 6.4%)

On the other hand, this is slightly heavier than 1/100; of the mass of ice in the same capacity.(difference 2.4%)

'looloh' is named for the fact that it is 100;10; times unified atomic mass unit.(almost exact) It means that Avogadro constant is expressed by 100;10; times unit quantity(=reciprocal universal mol) of the Harmonic System. 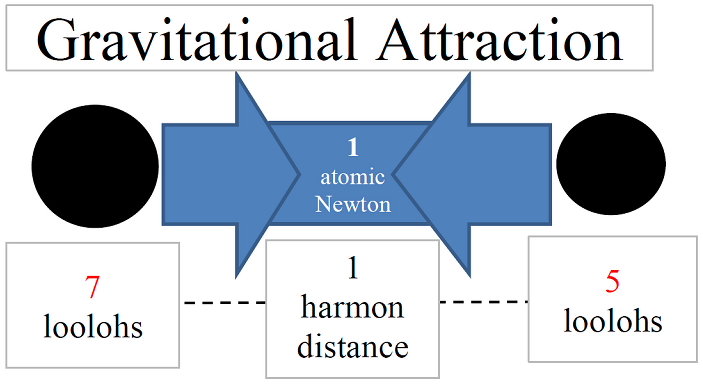 This is the Planck impedance itself. The unit name 'nohm' is an abbreviation of 'natural ohm'. 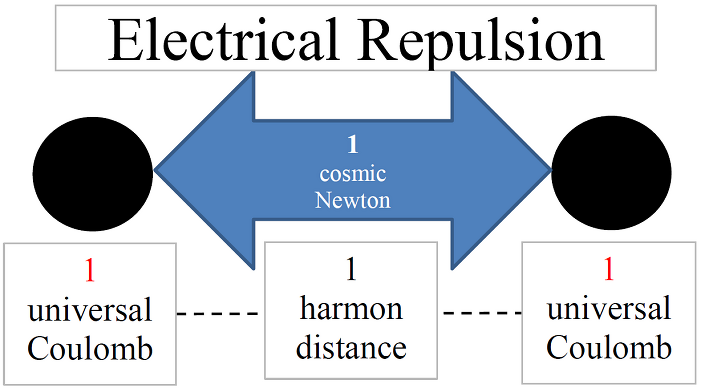 Relations of the electric and magnetic quantities in the Universal Unit System are shown as follows, where Ω2 is total solid angle of the spherical surface(see this ref): 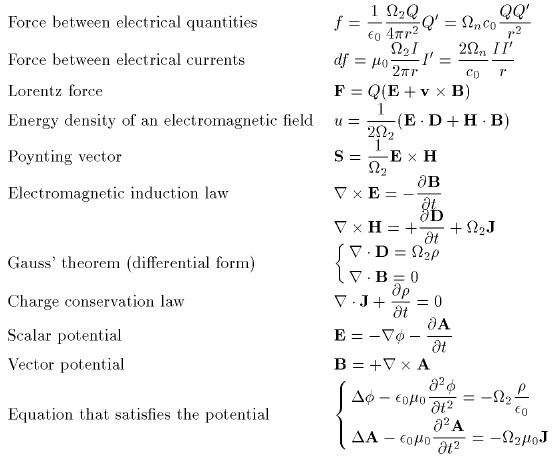 Using the Harmonic System, many constants can be approximated by Ω0n×10;m times the unit quantity, where Ω0 = 2, n = 0 or ±1 and m ∈ integer. The quadrant meridian length and gravitational acceleration of the Earth, the density and specific heat of water, which are used in the past for definition of units, are also included in these constants.

Please refer to this table and online converter for other units. This converter also teaches us the representation of units that belong to various unit systems.

The Harmonic System distinguishes 'calendar time' from 'physical time' as a different concept.

This quantity is time which flows uniformly from a viewpoint of physics.

'nic' is the physical time unit of the Harmonic System, and is on the natural time scale ladder of 'powers of twelve'.

The greatest common divisor of one tropical year and one day is 2-7 days, which is also equivalent to about 1000; nics.

This quantity is the coordinated mean rotation angle of the Earth derived by using the direction of the Sun as a coordinate origin, and its dimension is not time but plain angle.

The dimension of ratio of physical time and calendar time is [time / plain angle], which means the period length of one mean solar day. Because of tidal friction, this length is not constant and becomes longer little by little.

The unit that should be dozenal divisions of mean solar day is calendar time rather than physical time.

'day', as a unit, is equivalent to plain angle of total circumference.

The Harmonic System adopts 'day' as a unit of calendar time corresponding to one mean solar day, and uses the calendar time unit structure shown on the right figure.

Many of the constants introduced in Wikipedia Talk:Planck_units often have orders 8n-1. Therefore, it is convenient to use the factor U(=10;8(12.8)) to make the units of the Universal Unit System into human scale. The factor U can be regarded as a conversion factor between atomic scale, human scale, and cosmic scale. Since power 8(=23) is a power of 2, the decimal myriad system has affinity for our system. So, we propose the duodecimal myriad system in replacing ten/hundred with dozen/gross. Larger numbers consist of uni(1),di(2),ter(3),tetra(4),penta(5),hexa(6),hepta(7), lli(0),on(+), and reciprocals are expressed by replacing on(+) with no(-).

When designing number counting system, we must make sure that the same expression does not represent different numbers for decimal and dozenal context. Since Systematic Dozenal Nomenclature fulfills this requirement, it can be used in combination with the Harmonic System. When units of the Harmonic System are combined with Systematic Dozenal Nomenclature, only powers divisible with 4 or -1, -2, and -3 should be used. In this situation, dozen(10;), gross(100;) and doz gross(1000;) are used in substitution for powers 1, 2, and 3.

Retrieved from "https://dozenal.fandom.com/wiki/The_Harmonic_System?oldid=6551"
Community content is available under CC-BY-SA unless otherwise noted.